Full Duplex vs Half Duplex and Video Conferences

We have all seen the choppy and laggy video and audio in our Zoom, Skype and other Video conferences. Even watching a TV program or News Report you will see an interview where someone obviously has connection issues. I can honestly say that almost all of them are not because of having a poor internet connection, but rather from using WIFI to connect to thier router vs using an Ethernet Connection, that is causing the issues.

Full Duplex vs Half Duplex Explained

Wi-Fi networks are all Half Duplex. Despite the fact that there are a few articles that claim that Wi-Fi 6 (802.11ax) does support Full Duplex. These are really misleading and don't really tell the whole story. For more information read this article from Toolbox.com that explains it in more detail. Don’t Believe “Full Duplex” in Wi-Fi 6..

To Explain Half and Full Duplex in simple terms would be to compare driving your car on a narrow residential street with cars parked on both sides of the street. If you see someone coming from the other direction you have to squeeze in between two parked cars until the other vehicle passes, or vice versa. Half-Duplex networks (WIFI included) are very similar.

Full Duplex on the other hand is like a 8 lane freeway, 4 lanes travelling in each direction and not effected by the traffic flowing the opposite direction.

The only way you can obtain a true Full Duplex connection is to connect to your router with an Ethernet Cable. 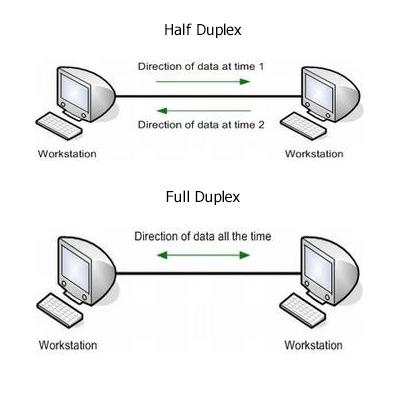 If you are streaming video from Netflix, Youtube or some other streaming service you are only streaming in "One Direction". From the Streaming server to your TV or home network. Not a problem for WiFi. Most Wifi networks are fast enough to provide satisfactory results.

With WIFI you can, and may have network lag issues as traffic cannot flow in both directions at the same time. Some refer to this as a Walkie-Talkie effect. With a "Wired connection (Ethernet Cable)", connected in Full Duplex mode, it can handle the traffic in both directions with no issues what-so-ever, providing a much smoother performance for your Video Conference Meetings.

As you can see, with Video Conferencing programs such as Zoom, Skype, Webex, Google Meet, It is not so much as about the speed of your network, but really the ability to be able send and receive traffic in both directions simultaneously. And currently, at this time only an Ethernet Connection which is capable of "Full Duplex" can accomplish this.

Located in Edmonton, AB Canada, Clustered Networks was Incorporated in 2001 and has offered Network / Internet and IT Consulting services for over 20 years. We offer personalized service! Call Us Today! - Click Here for our Contact Info

Support our Site!
Buy us a Coffee!